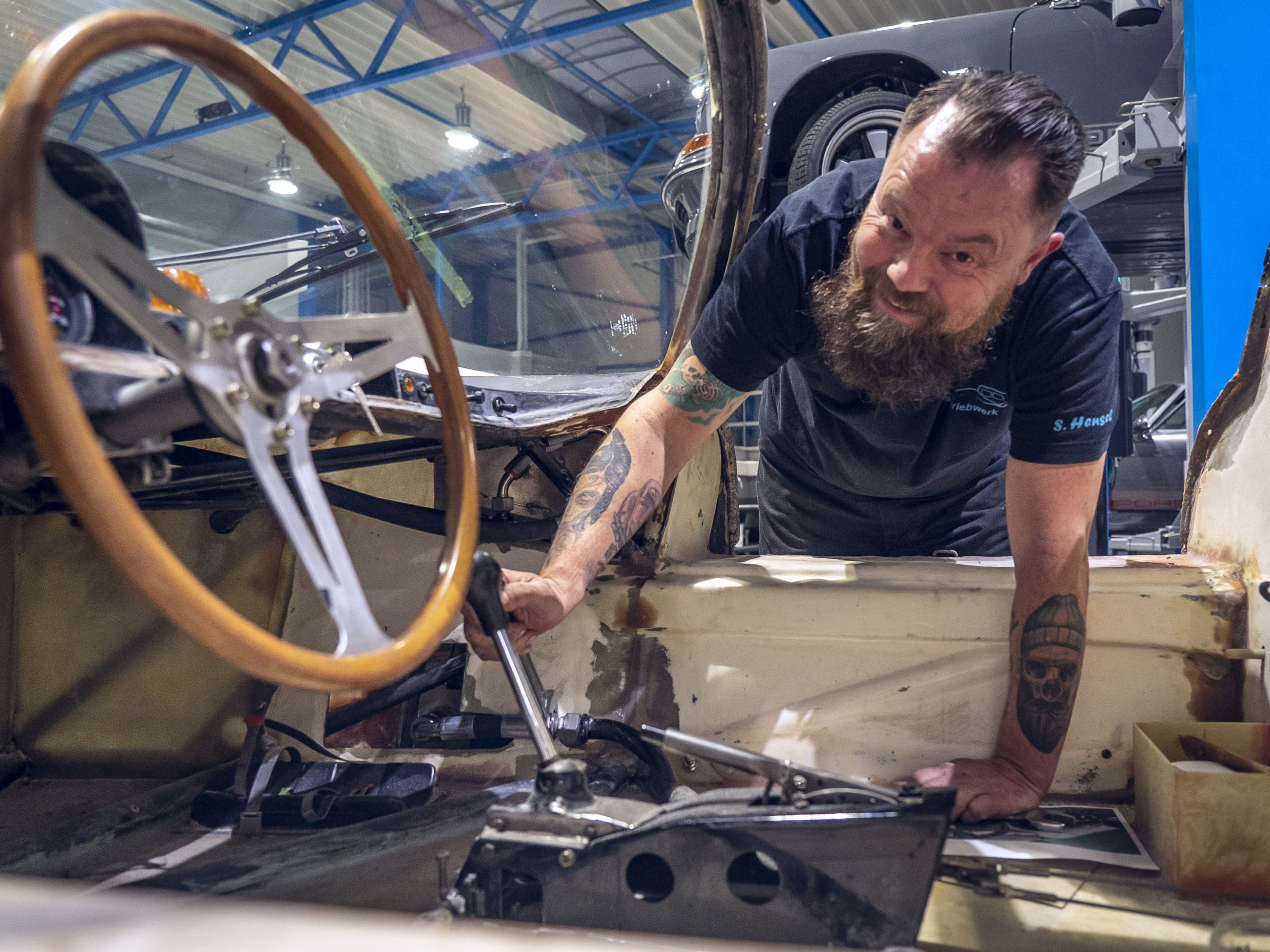 The announcement on July 12, 2021, that one of the 52 spaceframe prototypes produced in first series in 1966 would be brought back to automotive life at DTW Germany | Das Triebwerk generated lively interest. This was followed exactly two months later by an initial stocktaking. In the meantime, another two months have passed: Time for a new status report, to which the responsible project manager Sven Hensel contributed.

Installed: The piping of the gasoline system is complete.

Laid: Cabling and instrumentation are progressing.

Buried: The gearbox is being searched for in the North German lost and found.

There are still a few hours of work to be done before project manager Sven Hensel can push a prototype ready to roll through the workshop of dtw germany | das triebwerk. He has put a great deal of attention to detail since the first stocktaking on September 12, 2021. He almost finds it difficult to get started. But then he does get into the story. His entry point into the story: laying the fuel lines. “I pored over all the technical literature,” reports the full-bearded technician. “At the time, there was actually no such thing as the one, sole construction state in prototype construction at Porsche. I kept finding minor deviations and of course had to find a common thread to follow.” In the meantime, the lines have been fully installed in the steel lattice tube frame. This also applies to the fuel pump that will later supply the Weber-IDA carburetors with gasoline. “Operational reliability plays a crucial role here,” notes Sven Hensel, “after all, the heir to the Porsche kit will also be driving his Carrera 6 later-if not in a race, then at least on the road.

Todays customers father, a well-known Suzuki car dealer from Wuppertal who has since passed away, started the construction project 30 years ago. He misplaced and buried many a trade in his almost unfathomable parts treasure trove in northern Germany. For example, meticulous records tell of an original gearbox that has not yet been found. For the time being, a gearshift unit from the Porsche 914/6 will have to fill the gap. “But only,” clarifies Sven Hensel, “until the right transmission is unearthed.” He himself has already been on site a few times to get his own impression of the dimensions of the old stock and admits that lifting the last treasures will probably take quite some time. Until then, he devotes himself to small things like placing and connecting the delicate switches in the dashboard. The new wiring harness, manufactured and delivered by an electrical professional from the Bergisches Land, is also in place. Since the wheel housings are also complete, the Carrera 6 should soon be ready to roll, at least in push mode.

Then a trip to Wuppertal is in store for it. This is where not only the former initiator of the construction project is (or was) based, but also the plastics designer Heinz-Falko Roehnert and his son Sven, who made a name for themselves in 2016 with what is probably the world’s most compact (retro) caravan, the “Piccolino”. Roehnert junior will adapt the entire body cladding made of fiberglass-reinforced plastic and sand it down very precisely. Made ready for painting, plain white should bring shine to the cabin – garnished by a rear lid made of yellow-tinted Plexiglas and the typical notches. “Unfortunately, the hood turned out a bit too big,” notes Sven Hensel, “I’ll have no choice but to carefully bring the contour to the right size with the Dremel.” In general, several hundred hours of work still need to be scheduled before the 1966 icon can be put into operation during the coming year. “It’s not as if I can lend a hand every day on this exciting trade,” Sven Hensel clarifies, “after all, we have many other nice jobs to do at the engine.”

What will happen next?

The next few weeks and months will show – to be continued.