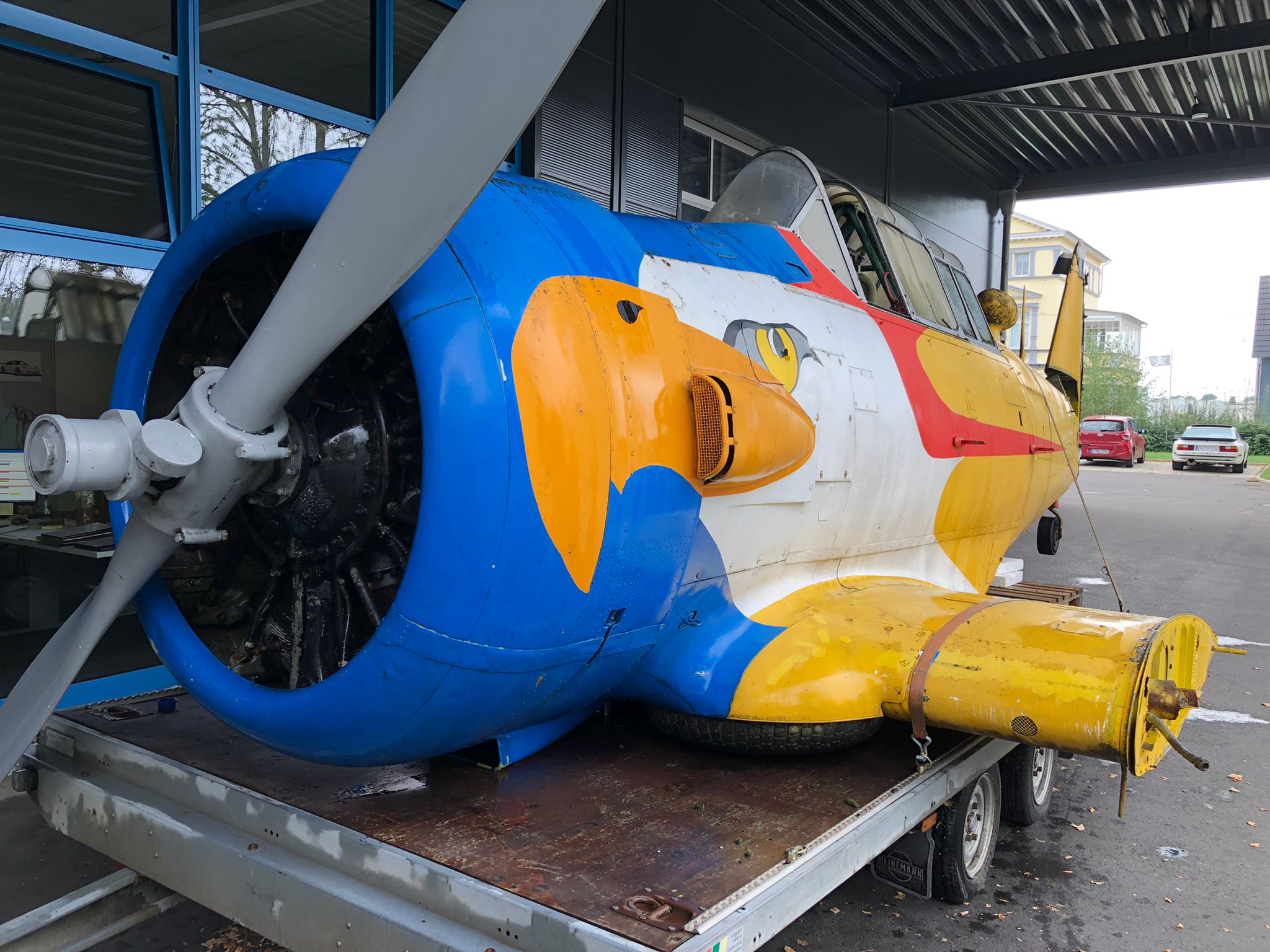 The eagle has landed: A Wuppertal landmark relocates to Schwelm.

For four decades, a discarded airplane on the edge of the A46 autobahn was considered a Wuppertal landmark. Beside the facilities of an automobile dealership in the Varresbeck district of the city, a two-seater aircraft built by the American aviation company North American Aviation back in 1938 attracted a lot of attention – not least because of its colorful livery. But now the flying object has moved. In Schwelm, the 12.80-meter-long and 1.890-kilogram heavy contemporary witness has found a new home. Background: an inheritance created from technology of yesteryear.

Schwelm, Wuppertal-Varresbeck. One of Wuppertal’s landmarks moved to the neighboring town of Schwelm on Friday last week to great public interest. For 40 years, the brightly painted plane of a car dealer on the edge of the A46 highway attracted attention, especially in the winter months. Then the bare trees revealed the view of the American flying object owned by renowned Suzuki dealer Jürgen Bänsch. When he died, his son Florian inherited not only the two-seater aircraft of the American aviation company North American Aviation from 1938, but also an entire collection of old technology that is highly valued in collector circles.

DTW Germany | Das Triebwerk assured active support for the refurbishment of the estate – the company specializes in classic Volkswagens and also Porsches at its location Schwelm. Stephan Rohleder and Christian Wilms, the two founders and owners, cultivate a distinct passion for anything with an engine drive. “For us, the name Triebwerk actually says it all,” admits Christian Wilms. Together with his neighbors from GOMOLZIG Aircraft Services GmbH, the technicus developed a plan to move the venerable aircraft to his home on Eisenwerkstrasse in Schwelm after 40 years in its accustomed place. In addition, the aircraft from the late thirties was to be restored at a later date- a supreme discipline for the aviation experts next door.

“Of course, we want to keep the eagle painted on the front of the plane’s nose,” reports Christian Wilms, “after all, we would like it to say that the eagle landed on our premises in Schwelm.” In addition, the overhaul of the 600-hp, 21.2-liter nine-cylinder radial engine is a far goal. Although the voluminous power unit is still to be functional, its overhaul is planned in the interests of preserving the historic substance. The first step was taken with the transport on Friday last week; GOMOLZIG Aircraft Services was responsible for the transfer. “An exciting event!” Christian Wilms states and asks: “When in life do you, as a technology maniac, ever get the opportunity to bring an airplane home to your own company?”
All those who already miss the iconic plane as it passes by the German Ring in Wuppertal-Varresbeck may hope: After the overhaul, it will also be mounted on a presentation rack at its new destination, visible from far away – to become a landmark in Schwelm as well.

The eagle has landed: A Wuppertal landmark relocates to Schwelm.